This is a scripting tutorial explaining to you what object orientated programming is and teaching you how to use the OOP features of MTA. This was originally created by qaisjp (talk) 22:48, 8 June 2014 (UTC). Forum post.

OOP stands for object orientated programming. Three simple words, and you'll probably understand the last word the most. OOP is where all functions relating to a single instance are called on that instance, an instance being a creation of a class - an element class, a database class, a player, a vehicle. Originally, everything was procedural, you had to do things like:

More often than not, you know what you're dealing with. The variable almost always links back to the type, you would name a vehicle that exploded as explodedVehicle, or at-least in context you would understand that exploded implies a vehicle when in the onVehicleExplode event. So you have to write a long function and refer to the vehicle manually when working procedurally. Painful. Object orientated programming is very different to this and works with each "object" individually. Instead of having to call a function and referencing it inside the call, you actually call the function INSIDE the class.

You probably think everything you can create and pass to functions are elements. A vehicle is an element. A player is an element. Anything that is an element is also a class. Connections create an instance of a class, but "connection" isn't an element, it's an instance - an object. Throughout the tutorial when I say object, I don't mean createObject (unless I actually mention it), but to make things clearer I will avoid mentioning physical objects as I write this article. Here is a fancy venn diagram I created to show the simple organisation of classes and elements. 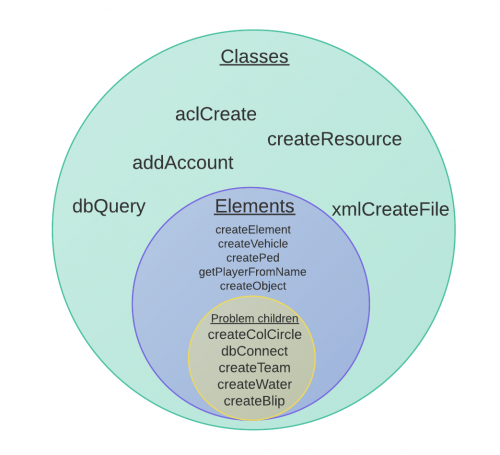 The functions on the left are sorted to show what kind of category the returned value rests in. We've got Classes, Elements and "Problem children". Problem children aren't real categories written in the code, just functions that break rules. Everything you can play with are classes: resources, vehicles, and teams.

All elements are classes, you can do:

but you can't do:

Problem children are weird things. You can't do all the functions mentioned in (actually, all elements don't allow the full assortment of functions to be applied to them, but I've especially mentioned a few of them) in the "Element functions" section of the functions list, but you can do destroyElement() on them. There are children of classes, for example, with players, the system goes like: "Element -> Ped -> Player". All Players are Peds and all Peds are Elements. Not all Peds are Players, and certainly not all Elements are Players. The main point here is that almost everything that you can create or retrieve and then reuse later use a class.

Instead of the code before, the code could be replaced with this:

Those functions are pretty useful, but there are more changes with OOP, I'll explain this below.

OOP removes the need to say the "create" part of the function, so instead of saying createVehicle, you just say Vehicle. It works exactly the same way, it's almost just like doing Vehicle = createVehicle. Fancy, isn't it? The only difference here is that you miss out on the extra things offered, Vehicle doesn't have these extra things, but Player definitely does. For example, instead of doing getPlayerFromName(), you would do Player.getFromName(). It's a nice and simple way to organise functions.

Since OOP sits on top of procedural, many things have been inherited from the style of procedural, but to make things easier we have variables for all the functions that require a single input. We've shortened getElementDimension() down to element:getDimension(), but we can also go one layer deeper: element.dimension. Yep, just like a variable. You can set this variable just like a normal variable and read from it just like a normal variable. Hey, you could even do this:

This code would take a random player and move them to the next dimension every minute for the next ten minutes.

player.position works too! But how do you change three arguments... using one variable? Vectors. Vectors are very powerful classes and they come in multiple forms, for the purpose of this introduction I'll just cover a three dimensional vector in terms of elements. Using a vector is very simple, and is, of course, optional. Wherever you can currently use positions, you can use a vector.

So, this is a simple example of creating a vehicle and moving it to the the centre of the map using vectors

Yes, I used the negative sign. Vectors aren't just fancy ways for positions or 3d rotations or whatever, you can use maths on them. The special maths hasn't been documented yet, but I'll try and work on that. So, as you can see in line one, I created a 3D vector at 300, -200, 2 and then in line two I created the vehicle at that position.

vehicle.position returned a vector and also takes a vector - it is pretty much setElementPosition() without the "()". Just a simple variable; so, in line three, I changed the vector value of the position of the vehicle. This is where the maths happened, in simple terms this is what is going on:

Vector maths is slightly complicated but it definitely allows for a wide variety of mathematical magic. Check out the useful links below related to Vectors and Matrices (Matrices = plural form of Matrix) to understand more about how this works.

The documentation for the OOP syntax intends to be very simplistic and is supported by the procedural syntax. To keep things simple, everything is consistently formatted in a certain way.

If you are a contributor to the wiki, please also consider reading the OOP template.