Multi Theft Auto: mIRC Admin (MTA:mA) is an admin client for MTA developed by Aeron in mIRC. It has the possibility to create and run custom-made mIRC scripts on MTA servers, useful for creating gamemodes, whilst providing other functions such as cheat protection and links to other programs.

It all started back in the MTA:VC 0.2.2 days. A normal player nicknamed Aeron drives around on his PCJ600 and sees some other players racing 'orginized' racing. He joins the club and did some races. The only problem was that the countdown of 5 wasn't really smooth and the player who's typing it was always the first to start or the last. Aeron wondered if there was not a possibility to get some sort of script running that does the countdown that gets triggerd with '!count'. After some searching he realized there was no such ability. Therefore he decided to make his own. With use of Ethereal he sniffed around in the packets that MTA sends and note them down. He saw that the packets were not encoded and that there was some sort of structure. After creating alot of mIRC-scripts over the years, he created one to connect with a MTA server as a client and named it MTA Connection Script. After some scripting he could finally create his very wanted '!count'-script:

Later he made a post of it on MTA forums which can be found here. After some positive replies, he decided to continue work on it. But after this post and a PM to Blokker_1999 about the netcode the MTA team realized this could go wrong as you can see in Blokker_1999's reply on the PM:

MrBump made a suggestion to make it Admin only and MrBump became Aeron's contact person and advisor about the script. Aeron renamed the script to MTA Admin Control and had a warm welcome in this post after there where handy scripts running on some popular servers.

A couple of days later when MTA:VC 0.3 was released posted MrBump a frontpage post when MTA Admin Control v1.18 was ready for release, but he decided to release it under the name MTA mIRC Admin.

This version got released when MTA:VC 0.3.1 came out and came with wildcard IP management, an auto updater, new game 'modes' and a few other little things.

This version was released when MTA:VC 0.4 came out and came with PM dialogs, GTA:3 support, Admin+, map function and other little things. Over time, MTA:VC 0.5 support, multiple script support and zoom function for the map were added.

This version was released when MTA:SA 1.0 came out and is very limited, like the previous MTA:MAs.

There are hundreds of scripts for MTA:mA. These are the most popular ones:

A very popular script is MTA:mA:GRS (General Release Script, developed by Oliver Brown ([FMJ]Oli), which is widely used in both GTA3:MTA and MTA:VC servers. 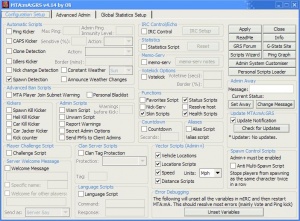 A Clan RPG Script developed by [FMJ]Oli and Jax Features:

The orginal forum thread can be found here.

Retrieved from "https://wiki.multitheftauto.com/index.php?title=MTA:mA&oldid=74149"
Categories:
Cookies help us deliver our services. By using our services, you agree to our use of cookies.